I have a couple of friends (you know who you are) who are involved in a charity called friendsofpicu.org.uk. The group is raising funds for the Paediatric Intensive Care Unit at Southampton General Hospital in the UK. One of the ways that the group is raising funds for this very important facility is via the sale of a special book. Ahhh, a book, a book, ooooh, I see why your blogging about this now!! 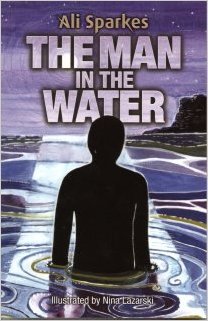 The book’s author, Ali Sparkes, became a patron of the charity and wrote the book for the winning bidder at one of the charity’s events. ALL proceeds from the book go directly to the charity. So I saw my friend out in the cold a couple of weekends ago, at a Christmas Fayre selling the book. I hadn’t even thought about it before, but I offered to introduce you (my multitude of loyal followers) to the book to see if we could push some sales and do some good for the charity. I also already own the book as my son bought it so I am allowed to read it under The Rules 🙂

The Man in the Water is a pretty short children’s or young adult book. I should be able to nip through it quite quickly. I will tweet as I go as per usual, and I will review at the end. It is a bit odd that I am crowbarring this book in just ahead of Bill Hicks, That may be one of the biggest divides between between two books that I have read back to back! Watch this space to see how I get on.

You can get The Man in the Water from Amazon as a paperback and there is still bags of time for this to get to you and be all wrapped up before Christmas.

So what are you waiting for?