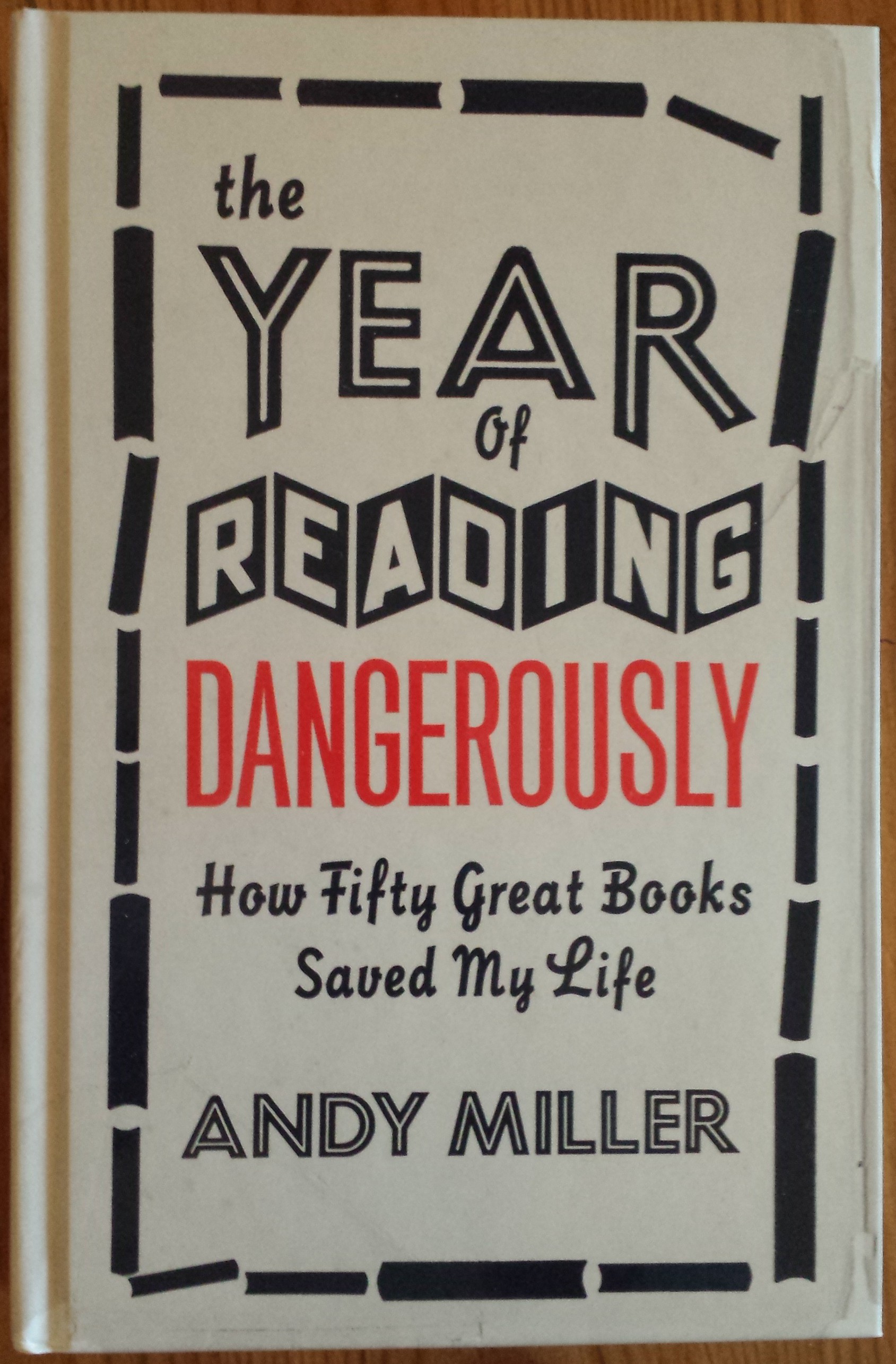 The Year of Reading Dangerously by Andy Miller is a book that illustrates a project so close to my own bookish journey that I have found it very difficult to review. As a book in its own right it’s great. Andy delivers a fantastic articulation of his emotions and his opinion about the books that he read. More importantly though, he describes a process that changed his outlook on life. The book is a well written account of a year in Andy’s life and how 50 neat little piles of paper-potential made their impact… OK, OK, some of them were actually quite big!

The reason that this review has taken me quite a long time to write is not because I wanted to do justice to Andy’s prose (soz.) It is that the book has many rather disconcerting similarities to my own Post Consumer Book Club. I experienced a truly odd feeling when I unwrapped a Christmas present to find this book. Unexpected and unknown to me, yet so close to the journey which I had started 6 months before. As I read I found so many familiar feelings described, so many similar situations that drove Andy towards doing something more than just read occasionally, made him commit to something to see where it took him.

I expected there to be some fundamental difference in our reasons for doing what we’ve done. Mainly because the manifestation of our discontent is quite different. Andy chose a list of special books, books that he needed to read, books of betterment.  I chose everything I own that I hadn’t read! Yet I could have written the formative sections of TYPOD (all be it badly!) We both found ourselves looking at bookcases full of unread books and wanted to commit to something meaningful; his motivations were startlingly close to mine. The difference? Well, as I said, Andy chose to commit to a list of well thought out books; a subjective list, but a good list. There was one slight problem with Andy’s approach; it took him a long time to create the list. It took him years in fact, but once done, he had a strong list of 50 books of betterment. In my case, I wanted to take some more immediate action, in recognition of the fact that I wouldn’t have done anything if I had waited. The difference in the two approaches meant that, relatively speaking, I started about 2 years early, but I have a few more books to get through so I guess, duration wise, it may be a dead heat in the end? We might even find out in a year or two unless I’m still going? That’s always possible, as I’m already demonstrating, my book list is going to grow and be added to. As long as change is strictly in adherence to the rules then that will be fine! I also know that I will have to let some of my books go along the way, for the obvious reason that they will be shite! Still, when I started The Year of Reading Dangerously, all these parallels built up and I felt an affinity with Andy and his well written reasoning, his books and his dangerous year.

The Year of Reading Dangerously does not describe reading on a cliff, or in the middle of the M25, or even next to a crocodile! Although these could definitely be considered dangerous in the usual sense. Andy’s interpretation aligns with the definition of the word that has always been synonymous with the written word; reading some things is still illegal, some are revolutionary and some will take you to places you don’t want to go. Andy’s reading changed his life and made him consider what’s important in it. I was hoping for something similar when I started my blog. I can feel my understanding and opinion of my path through life changing as I read and as I work through some of the reasons I embarked on this interesting path. So Andy has completed his year and is changed for it. For me, it was decidedly odd to read through to the end of someone else’s reading experience when I am not even half way through mine yet.

Andy says that reading made him ask serious questions about art, work, family, freedom, integrity and packed lunches. Good. I really got a sense of how different books evoked emotion and  concepts as The Year of Reading Dangerously played out. The book is not about mentioning all 50 of the books Andy read, its about the journey, but I would have liked to find out a little more about why some of the books were on the list. I would also like to have heard about one or two that didn’t make the final cut. Both our lists shared a book in The Ragged Trousered Philanthropists. For me it  really did make an impact. I was jaded by consumerism and  interested in ethics when I started reading for PoCoBooC. I agree that it was pretty dry in places, but it doesn’t half speak to a dispossessed class. I try to imagine what reading it would have been like if I were one of Tressell’s peers? I suppose that I took the realisation of something that I already knew from Andy’s experience: Read, look, investigate, understand, question. Art provokes, but its a foil for us to test ourselves against. Someone else’s concept to accept or reject. Serious, dangerous, questions indeed.

There were so many aspects of this book that I want to talk about or mention, but I verge on writing a whole book about about a book about book, and that is just silly. I will end this post by saying that because I read The Year of Reading Dangerously:

Thanks Andy. Great book and a great project. Keep up the good work 🙂